BlogEmail MarketingBrand Humanity: Why Is It Important?

Brand Humanity: Why Is It Important?

Behind every brand, there is a story. At least, this is true for the most prominent brands you can think of: Amazon, Apple, Microsoft, and Nintendo. It doesn’t matter if Jeff Bezos and Bill Gates didn’t really start from scratch with a garage for an office - the mere concept of small steps growing into something big and groundbreaking is enough to inspire entrepreneurs and motivate them to bring their own ideas to life. Which is definitely not a bad thing.

However, modern brand stories consist of more than tales of brave trailblazers that made great achievements.

They also include humanity 🙌.

Nowadays, to be successful and accepted, a company needs a human face - a genuine human face, not a mask of concern and awareness. The internet allowed information to spread extremely quickly, making it almost impossible for people across the world to stay unaware of each other’s suffering, grief, and losses. To do something about it, to make a small contribution towards reducing that suffering is a natural human instinct. Therefore, the companies that ignore that very modern and very human need risk more than a couple of negative reviews. They risk losing the never-ending competition and ending up at the back of the bus.

We won’t be sharing any professional or marketing tips in this blog post. Instead, we will muse on businesses leaving Russia to express solidarity with Ukraine and explain why business reputation and morality matter more than one might think.

Currently, almost 1,000 large companies have curtailed their business in Russia since the beginning of the war with Ukraine. By large we mean major players, such as Maersk, one of the largest global shipping companies, the pharmaceutical giant Bayer, and Atlassian, the developer behind Jira and many other tools for organizing the workflow of companies and businesses across the globe.

🤔 Leaving a profitable market is not an easy decision - the loss of revenue, the headache of shutting down the offices, and relieving or relocating staff…for some business owners, nothing is worth so much trouble. This is why the massive exodus left many observers skeptical. Some people state that the companies weren’t actually leaving, just biding their time and waiting for the moment when they can come back safely. Others believe that most of the companies never left and just re-branded their offices in Russia to continue working under a different name. The general consensus stated that for many it was hard to believe that businesses would choose morality over profit - wars start and end, but revenue must flow. If not for the sanctions and the peer pressure from the consumers expressing their extreme dissatisfaction with companies staying in the terrorist country, the businesses would have never left of their own volition.

This skepticism might be true for some companies - we don’t know that for sure. However, contrary to popular opinion, businesses may withdraw from problematic markets for more reasons than peer pressure.

The recent years exposed our vulnerability. As businesses and companies were adjusting to the new conditions and challenges imposed by the COVID-19 crisis, they discovered their consumer’s need for something more than stability and profit - it was the need for humanity. As people were confined to their homeplaces and effectively isolated from their usual routine, they became extremely attentive to the way brands presented themselves. Those who failed to acknowledge or respect the emotional and mental pressure their target audience was going through, were discarded and heavily criticized.

But what does it mean - to be human?

What do all these factors have to do with companies leaving the Russian market because of the Russian invasion of Ukraine?

In fact, they have a lot to do in the current situation.

Businesses that are aware of their surroundings, understand such things as a long-term effect. They know that each step they take right now makes waves that will catch them years later. When it comes to situations where a company has either to show their morality and make an unprofitable decision or ignore the crisis in favor of their revenue, the latter seems like a better option for business. And it may be - in a short-term perspective. From a long-term perspective, the company is guaranteed to lose a lot more than it earns.

First of all, a fraction of buyers in other markets will cut ties ✖️ with the company that chose profit over ethics. And it’s not just loud words. 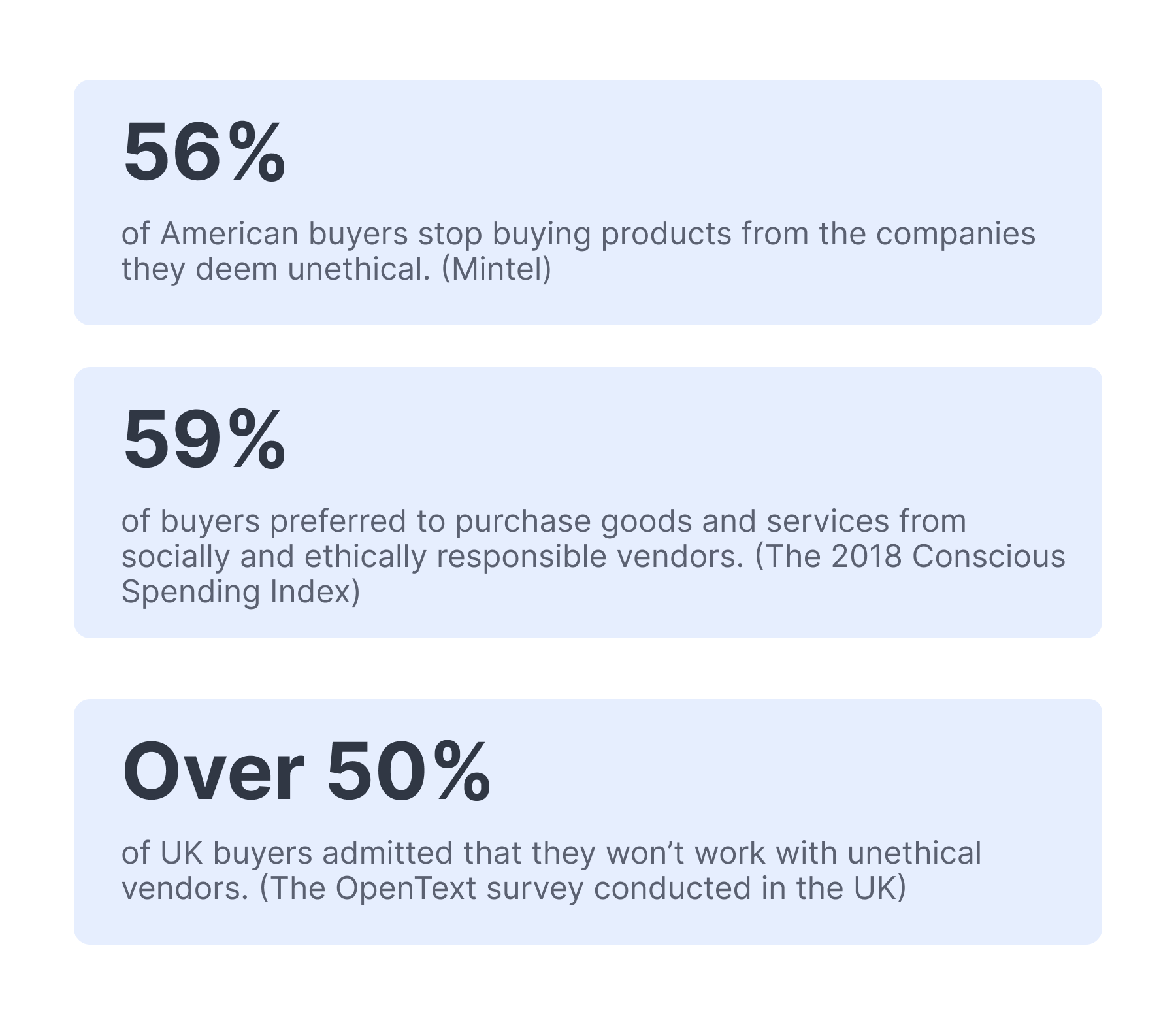 As we mentioned above, your buyers are smart. They do their homework. They wouldn’t mind spending some time researching a company, its products or services, and how its unethical behavior impacts human beings before they make their buying decision. They would also refer ethical businesses to their fellow buyers and warn them against working with unethical businesses - this is how brand reputation works.

Second, the long-term consequences will settle in. Aside from the moral aspect of not pulling out of the country guilty of war terror, the companies are guaranteed to encounter the following issues.

We’ll be honest, it’s hard to break down all the long-term consequences of not cutting ties with a country that started the largest war since WW2 - this is an unprecedented event that we’re observing right here, right now. However, these two effects, mentioned above are the most obvious ones - and they’re happening already.

Another reason why businesses would leave the market and choose their reputation over profits is that they understand the necessity to show their ability to make a difference.

The modern human-to-human approach demands businesses and companies to do more. Companies are encouraged to keep growing, to become stronger - and to use that strength responsibly, for making the entire world a friendlier place. For that reason, so many businesses use recyclable materials and donate to humanitarian organizations that are very serious about their contribution to reducing the carbon imprint and supporting local communities. This way, they show how much they can do beyond their limits and make a change.

Due to this, when the push comes to shove, remaining indifferent to the crisis is perceived as weakness - basically, the business admits its inability to make a strong decision and hold its ground. And if such a business builds its tagline, message, and code of conduct around strong values (think of Google’s “Don’t be evil”), it’s even more catastrophic. If a company fails to follow its own message, how it can be trusted?

The world has changed. It keeps changing at an incredibly fast pace. However, even in the middle of the chaos and crisis, there is one thing that is clear and undisputed - morality matters 🫶. Actions speak louder than words and humanity is as valuable as ever. Business owners have to face hard, complicated choices that may impact their roadmap and/or their reputation - but the way how they make their choices is guaranteed to define their image and their future in their industry.

This is why we must emphasize the importance of staying human. The chaos, the uncertainty, the crisis - all of it will end at some point, leading to many businesses and entities re-evaluating their approaches and being seen from a new perspective. Those who showed empathy, humanity, and the ability to do an ethical choice even at the cost of their profit will be seen as new pillars for the new and improved world, where connection, communication, and cooperation builds on respect, trust, and safety.

Increase email deliverability
Subscribe to our Blog
Subscribe to our Blog and receive weekly tips and insights on how to grow your business from Folderly experts.
I agree to receive email from Folderly
Author:
Vladislav Podolyako
Founder & CEO
Vlad’s decades of entrepreneurial wisdom and business building experience have allowed him to successfully mentor a diverse group of business owners, entrepreneurs in growing their companies. A recognized expert in the areas of transforming organizational culture and leadership development, B2B Sales, Marketing, spent more than 10 years building technology products, with a background in communication networks and electronic device engineering.

We all get tired from time to time. It’s normal to feel exhausted due to information overload. However, what should you do when your recipients start running low on energy in the middle of your email marketing campaigns?

Nothing is set in stone. Our society is constantly changing. The latest shifts made things a lot more dynamic. For business owners, it can be a bumpy ride, but when you know what to look out for and how to adjust your campaigns and marketing, getting adapted is a piece of cake.